Compost teas infuse soil with microorganisms, and food for those organisms, that help plants grow and stay healthy naturally. 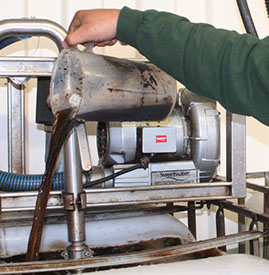 The principle of organic care is to establish a well-aerated, biologically rich soil. At Almstead, our goal is to create and maintain a soil for your trees teeming with the beneficial microorganisms that naturally promote growth while out-competing harmful, disease-causing organisms that often thrive in unhealthy soils.

We add only natural foods that encourage microorganisms to reproduce, such as humates and fish oil. Teas can be applied in three ways, depending on the recommendation of your Almstead arborist: as soil drenches, soil injections or foliar sprays.  After several years of practicing compost tea brewing, our organic care specialists have developed a custom recipe that has proven to be highly effective among the trees in our area.

The first 5-7 inches of the soil are the most organically active. They contain humus (decaying plant matter), live roots, and oxygen - all the foods that beneficial soil microorganisms need. The rhizosphere, which is the area just surrounding plant root tips, is where most of these soil microorganisms live. That's because the area is rich in fresh, nutrient-rich plant byproducts excreted by the roots. In addition to supplying roots with nutrients like nitrogen, when beneficial organisms live in the root zone of a tree they take up the space that harmful organisms look to inhabit.

Organic care can protect and improve the natural beauty of your landscape in a safe and effective way. Compost teas are an essential component of it. 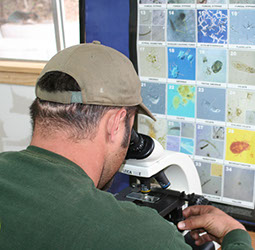 Beneficial microorganisms in compost teas include bacteria, nematodes, and protozoa.

Most beneficial bacteria in the soil are decomposers, consuming dead plant material and producing nutrients that stay in their cells in forms that other organisms in the soil can take in as needed.

Abundant in tree-filled ecosystems, many fungi decompose complex carbon materials in the soil (like dead wood) and retain the resulting nutrients in their own biomass, like beneficial bacteria.

A common type of fungus, mycorrhizae form symbiotic (mutually beneficial) relationships with plants. These kind of fungi attach themselves to root hairs and grow out into the soil as root extensions, feeding water and nutrients into the plants. In exchange, they have guaranteed access to the nutrient-rich plant by-products that so many microorganisms fight for in the rhizosphere. 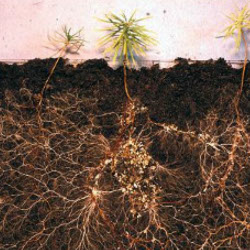 Beneficial mycorrhizal fungi form relationships with plant roots that extend the reach of the roots, increasing water and nutrient uptake.

As they feed on bacteria and fungi in the soil, protozoa and nematodes mineralize (release) the nutrients they don't need back into the soil. Plants get much of the nitrogen they need from these released nutrients because they are in a form that plants can consume (as opposed to being immobilized inside fungi or bacteria). In this way, decomposers like bacteria and fungi, mineralizers like protozoa and nematodes, and plants function together in a cycle.