Almstead Tree & Shrub Care Co. has grown from a one man operation, in 1964, into a full-service arboriculture firm with four offices...

Though the company has expanded over time, it remains a family business. Founder, Richard E. Almstead’s, sons Kenneth (CEO) and Michael (VP) are trained arborists who oversee four regional offices. Today, Almstead is an industry leader in tree, shrub and lawn care in the NY/NJ/CT area. We provide quality commercial and residential services to Westchester and Putnam counties in New York, much of New York City, Fairfield County in Connecticut, and northern New Jersey.

Almstead began servicing the lower part of Westchester County, NY. "I was successful right away," says Almstead. "There was great financial risk at first, but I quickly learned that if I gave the clients more than they expected and did everything as a professional, I would survive."  Almstead further developed his tree care expertise by studying arboriculture at both Cornell University and the New York Botanical Gardens.

The business continued to grow throughout the following decades, despite occasional obstacles. During the 70's, gas shortages plagued the country and long gas lines appeared throughout the Northeast. Ever the intrepid entrepreneur, Almstead turned a challenge into an opportunity. "We converted our trucks over from gas to propane, so we would have a steady fuel source," says Almstead.

Before long, people were asking for propane to fill the tanks on their gas grills. That resulted in the formation of a new business, Almstead Propane, which still sells propane gas to area residents today.

In 1993, Richard created a new division, Almstead Environmental Experts, to specialize in utility line clearance and vegetation management. The operation grew to extend throughout New York, Pennsylvania, New Jersey and Connecticut.  In 1998, Almstead sold the successful utility division in order to focus on the tree and shrub health care end of the business. That core business, now called Almstead Tree, Shrub & Lawn Care Company® is a full-service firm. Clients vary in size from a homeowner with a single prized tree... to a large estate... to a municipality; every client and landscape receives the highest level of expert care.

The tree care industry has changed since 1960, and Almstead has changed with it. Arborists at Almstead now are required to pass certification exams proving they have mastered pruning and tree care techniques, insect and disease identification and management, and safety procedures that protect their crews and client's properties.  Almstead's trained arborists also perform and conduct various testing and inspections in order to evaluate the risk associated with trees -- also known as “Tree Risk Assessment.”

In 2005, Almstead expanded it's core services to include comprehensive lawn care services. Clients can choose from three separate comprehensive care programs -- Organic Based, Pure Organic, and Traditional -- based on recommendations from Almstead's lawn care specialists. 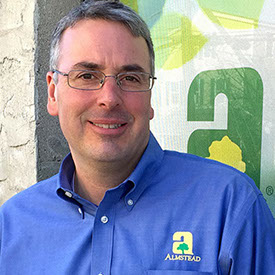 A truck, a rope and a chainsaw no longer suffice: Almstead arborists now use sophisticated tools such as Air Spades™  and  Resistographs®. We understand the subtleties of plant health care and design programs to control insects and diseases using environmentally responsible and minimally intrusive methods.

In addition to our head office in New Rochelle, New York, Almstead now has 3 regional offices -- in Hawthorne, NY, North Haledon, NJ, and Stamford, CT.  We also continuously invest in the latest technology and equipment, as well as in the training and development of our arborists, technicians and other staff. Our goal is to provide the highest level of service and reliability in the industry to our customers, as well as help our employees achieve their career goals.

Almstead is also at the forefront of organic care. This includes a laboratory for analyzing soil samples and preparing customized compost teas, as well as organic pest and disease controls. 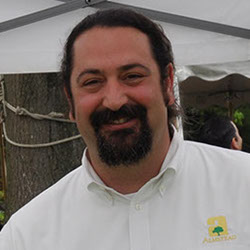 The opportunity to work with his sons has made Richard Almstead's success all the more satisfying. "It's been great working with my family all these years."

"We are a family business where all our employees are also part of the family," says Richard. "If I have one piece of advice to offer, it is to choose good people. We would not be successful without the people who have worked for us over the years. Not just the family, but all the employees."

The past president of the New York State Arborist Association, Richard Almstead now spends most of his time mentoring the Almstead team, fostering client relationships and safeguarding the reputation of the Company.   His latest project is managing and expanding the company's newest venture, Almstead Mulch, which produces environmentally friendly mulch and compost.